The trade everyone was waiting for fell into place yesterday, as the Mets traded Carlos Beltran. It was San Francisco who came up with the winning offer, parting with top pitching prospect Zach Wheeler. It was a good deal for both teams, but especially for the Mets who had to move free agent-to-be Beltran, had to get younger and had to improve their starting pitching and this trade potentially does all three in one fell swoop.

No one can guarantee anything with prospects in any sport and baseball is the most unpredictable of all. But Wheeler is close to the major leagues, so the margin of error isn’t as high as it would have been, for one of Philadelphia’s “baby aces” who are lingering further down in the system. It made little sense for the Mets to sign Beltran to a contract extension and everyone in baseball knew it. GM Sandy Alderson has used this midseason trading period to dump two huge salaries, in Francisco Rodriguez and Beltran and now he’s added a key young asset to his pitching staff.

While I think the Mets are the big winner in this deal, it was still a good trade for San Francisco. Wheeler may have been the organization’s top pitching prospect, but he wasn’t the only one. Furthermore, the rotation at the big-league level is young and deep. GM Brian Sabean had surplus arms in stock and with his everyday lineup having an alarmingly large number of holes for a World Series contender, it made sense to use Wheeler to fix it. Beltran gives the Giants a real shot at winning a second straight World Series and if nothing else, makes it much more likely they’ll hold off the feisty Arizona Diamondbacks in the NL West.

The other big news on the trading front yesterday was the three-team dealings between St. Louis, the Chicago White Sox and Toronto. The Cardinals dealt Colby Rasmus and some of their bullpen depth in exchange for starting pitcher Edwin Jackson and some of Toronto’s bullpen depth. The White Sox gave up Jackson and third baseman Mark Teahen, while adding reliever Jason Frasor and a minor league arm.

I like Toronto’s take most of all. They add Rasmus and Teahen for what amounts to a group of middle relievers and serving as a clearinghouse for Jackson on his way from Chicago to St. Louis. Rasmus is the single best player involved in this 11-player blockbuster and because of the rough six weeks or so he’s had, his value is at its lowest. The Jays pick up a potential blue-chip stock at a good price. At 51-52, they have a chance to have a winning season and catch Tampa Bay for third in the AL East, both of which would be worthwhile goals. St. Louis improved themselves, getting pitching depth in Jackson and with the NL Central race likely going to the team they just grind out some consistency, rotation depth could be the difference. I’m not at all sure what the White Sox are getting out of this. Frasor will be a good addition to a pen that mostly relies on closer Sergio Santos, but I wouldn’t have given up a respectable starting pitcher in Jackson, plus Teahen to make the deal happen. Perhaps GM Kenny Williams isn’t done moving and we won’t understand this move until the rest happen. The next four days to the deadline will be interesting indeed. 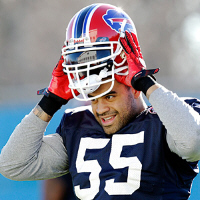 Buffalo hasn’t had a winning season since 2004 when they went 9-7. They haven’t made the playoffs since 1999 when they lost on the infamous “Music City Miracle” in the first round at Tennessee. They haven’t won the AFC East since 1995. And a look at their personnel as we head towards the 2011 season suggests that none of those streaks are in jeopardy of falling.

The most interesting part of this Bill team is the addition of outside linebacker Shawn Merriman, whose leg problems ended his Pro Bowl run in San Diego. When Merriman’s healthy he’s as fearsome as any linebacker in the game and any 3-4 defensive scheme needs playmakers at this spot. I strongly suspect Merriman’s productive days are behind him, but this is a worthwhile gamble on Buffalo’s part that could pay big dividends.  Buffalo’s got the other key component of a 3-4 set and that’s a noseguard who can tie up blockers up front. Kyle Williams made the Pro Bowl last year and gives the linebackers the opportunity to make plays.

There’s just not much else defensively for Buffalo to get excited about. They lost inside linebacker Paul Posluszny to Jacksonville in free agency, taking away a steady presence against the run. The secondary is a mess and head coach Chan Gailey will likely give two rookies, Aaron Williams on the corner and Da’Norris Searcy at safety, the chance at some playing time.

Gailey’s offense doesn’t look capable of winning the shootouts this defense will likely force them into. The offensive line has problems at tackle, meaning quarterback Ryan Fitzpatrick can expect pressure and difficulty getting the ball downfield. One of his wideouts, Lee Evans, is suspect going over the middle and Steve Johnson has shaky hands. Running back is a strength, with veteran Fred Jackson leading the way and second-year man C.J. Spiller learning behind him. The interior of the offensive line is above average and Jackson’s always been effective picking his way through the middle, but if the tackles can’t control the edges, there won’t be any big plays on the running game.

The Bills have some decent players, but other than Williams, no real star-level talent that can make a difference in a game. They played hard for Gailey last year and I would expect them to do so again this year. There’s just not enough talent here for it to result in wins.