THE BASEBALL WEEKEND AHEAD 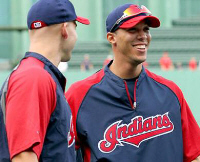 There’s marquee matchups on tap for baseball this weekend, with possible LCS previews as New York goes to Boston and San Francisco hosts Philadelphia. You also have Cleveland traveling to Texas in key showdown. Here’s a brief rundown of those three big matchups…

NY Yanks-Boston: As usual, you won’t have to look very hard to find these games on TV. The Friday night opener from the Fens will be on the MLB Network, the Saturday game will go to most of the country on Fox and Sunday’s game is ESPN’s prime-time telecast.  The Red Sox rotation is frontloaded for this one, with Jon Lester pitching Friday, while Josh Beckett goes Sunday. The pitching matchups give the Yanks as close as they can get to a guaranteed win at Fenway on Saturday when C.C. Sabathia faces John Lackey, who continues to struggle. The Yanks are playing extremely well right now, having just finished blasting Chicago on the South Side, while Boston is churning along well themselves. A big question all year about the Yanks is how Bartolo Colon and Freddy Garcia would perform in August, and they’re paired up with Lester and Beckett respectively, in what promises to be good games to open and close the series. Keep in mind though that both teams are running away with a playoff berth right now, so even though they’re neck-and-neck, this series only becomes high-stakes if A-Rod shows up with his poker pals.

Philadelphia-San Francisco: The Phillies are really coming together as an offensive team right now. The pitching’s been there all year and now they’re getting solid at-bats from Jimmy Rollins, Chase Utley, Raul Ibanez and Shane Victorino, the latter of whom has been consistent all year. Hunter Pence is off to a decent start in his new home and the Phils have separated themselves from the rest of the contenders as the undisputed team to beat. San Francisco lost two of three to Arizona to start the week and is facing a stiff run down the stretch for the NL West.  The Giants are playing with a lot more pressure on them the Phillies and are at home, but right now there’s a significant gap between these two teams. Portions of the country will get the Saturday afternoon game on Fox.

Cleveland-Texas: Friday night is the kind of game the Indians brought Ubaldo Jiminez in to pitch and he makes his Cleveland debut against Derek Holland. The AL Central race has been tight all year and Jiminez needs to win these kinds of games if he’s going to be the Tribe’s answer to Justin Verlander in Detroit. The Rangers have their newly revamped bullpen in place, but also have the Angels breathing down their necks. Regardless of what happens Friday, and even considering Nelson Cruz has a problem with his quad, the Rangers should be able to hit Fausto Carmona on Saturday and Josh Tomlin on Sunday, especially with Cleveland’s bullpen starting to show some chinks in its armor as the season wears on. And even though this is the most consequential series of the weekend, it won’t be found anywhere on MLB-TV, Fox or ESPN. It appears you have to subscribe to the Extra Innings package if you want to watch games that actually matter.

These games and all others on the major league card are available for wagering at Legends. Moneylines and totals and posted each morning.

Miami head coach Tony Sparano certainly set the cat down amidst the pigeons yesterday. When asked if he would consider Brett Favre as an option for his team’s problems at quarterback he said he wouldn’t rule it out. There’s no evidence of interest on Favre’s part, but this comment, along with bringing in Tiki Barber in for a workout, shows the head coach is pulling out all the stops to try and keep up with the Jets and Patriots in the AFC East.

Sparano’s time would be better served in shoring up his offensive line. He’s got a great left tackle in Jake Long, and it’s possible the coach can bring John Jerry and Richie Incognito along into solid guards. But they need more drive-blocking capacity if they’re going to make room for new free agent signing Reggie Bush. The defensive front seven is no less troubled. Here too, the Fish have a couple really good pieces, with nose tackle Paul Soliali and linebackers Cameron Wake and Karlos Dansby, but the left side of the linebacking corps is a problem, as are both ends in the 3-4 defense.

If we look on the outside, both offensively and defensively, there’s promise. Brandon Marshall had a decent year, although not quite what Miami was expecting when they acquired him from Denver and he’s somewhat of an issue in the clubhouse. Brian Hartline and Davon Bess are steady possession receivers, so whomever is quarterback has a good package of targets to throw to. On the defensive side, last year’s Miami team failed to live up to expectations because corners Sean Smith and Vontae Davis never could put it all together. They’re both still young and if they can get over the hump this season, they can be the foundation of a really good secondary.

Like most teams, the quarterback is getting all the attention, and Chad Henne has lost the confidence of the organization and the fans, and admitted he was “hurt” by fans recently chanting a demand to trade for Denver’s Kyle Orton. If Henne has lost confidence, then by all means go in another direction. But he’s not their problem. Their problem is more basic—there are not as many good football players here as there are in Foxboro and the Meadowlands, especially up front. Fix that problem rather than figure out which free agent or retiree you can persuade to take their talents to South Beach and you’ve got a much better shot at competing all season long in this tough division.

Miami is a 6-1 shot to win the AFC East. This and other betting propositions are available at Legends.