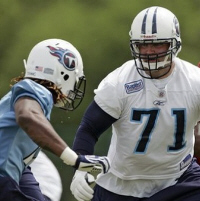 It’s a new era in Tennessee in one way, as Jeff Fischer is no longer on the sideline after a 16-year tenure that’s astonishingly long in this day and age in the NFL, especially for someone who hasn’t won a Super Bowl. But it’s the same era in another. The Titans promoted from within, in elevating offensive line coach Mike Munchak to the top job, so we can again expect to see a physical running game serving as this team’s cornerstone once again.

Tennessee’s offensive line is one of the best in the game, with tackles Michael Roos and David Stewart taking care of the outside and the interior providing the push for Chris Johnson to continue piling up the yardage. The Titans haven’t been able to translate this ground success into victories, because if you’re going to win in the trenches you have to do it on both sides of the ball. And Tennessee’s defensive front, not a strong point to begin with, got weaker with Jason Babin’s departure to Philadelphia.

Furthermore, even those like myself who believe success is founded on consistent running the ball and stopping the run, recognize that in the NFL you need to make big plays somewhere. It need not be the traditional way in the passing game, but you need to have the kind of game-changers who are the difference between a 14-10 loss and a 17-14 win. Tennessee doesn’t have those players, and bringing in aging Matt Hasselbeck might have been the best option available at quarterback, but it won’t solve this fundamental problem. The best Munchak can hope for is that Hasselbeck at least avoids mistakes. Which then means plays have to come from the defense. If that’s going to happen, rookie linebackers Akeem Ayers and Colin McCarthy have to grow up fast and do some damage. Tennessee’s cornerback tandem of Cortland Finnegan and Alterraun Verner are solid, so the Titans can try putting them in man coverage and making things happen up front. The coordinator change from conservative Chuck Cecil to the more aggressive Jerry Gray should serve that end. Now it’s a question of whether the talent can make it happen.

Whatever they try, it would be a shame to see a running game this solid not get a chance to play deep into January. Tennessee needs to get the pieces in place around the O-Line and Johnson.

Tennessee is presently getting 8-1 odds to upend Indianapolis and win the AFC South. This and other prop information is available at Legends Sportsbooks.