It was a year that produced Joe Paterno’s last really good team, some great individual talent in State College, Columbus and elsewhere and the beginning of a new era at Michigan that would be unfulfilling. Here are the top stories in 2008 Big Ten football… 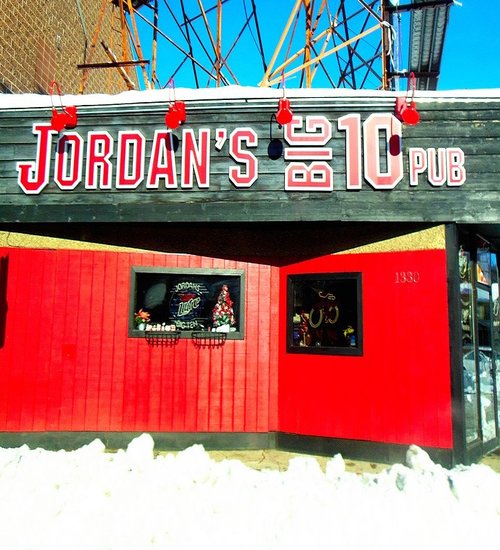 Penn State and Ohio State were the nation’s two best teams and ABC was on hand for their Saturday night battle in Columbus on October 25. The Lions were undefeated and ranked #3. The Buckeyes had only lost to powerful USC and were #10. A defensive battle ensued.

Ohio State was holding a 6-3 lead in the fourth quarter, in a game that felt like a throwback to the 1970s. Fittingly, it was the Nittany Lion defense that stepped up and made the big play. They forced a fumble that set up the go-ahead touchdown. After a field goal made it 13-6, the Buckeyes made one final drive. Penn State preserved the win with an interception on the goal line.

The two teams ended the season tied for first. This game was the difference in sending Joe Paterno to the Rose Bowl, the final major bowl trip for the legendary head coach.

The Michigan football program hasn’t been a consistent national contender for over a decade and the roots of the Wolverines’ relative mediocrity started in 2008. Rich Rodriguez was the new head coach after Lloyd Carr retired and he attempted a drastic renovation on the culture of the program.

Rodriguez had risen to national prominence with a wide-open spread offense at West Virginia, one that got him close to playing for a national championship in 2007. The theory was that he could juice up Michigan’s offense.

Sounds great in theory. Reality was different. Michigan didn’t play on the smooth artificial turf that West Virginia did. More importantly, Michigan had big offensive lineman that allowed them to play physical football, whereas West Virginia had to go finesse by necessity. The clash between the system of “Rich Rod” and the time-honored football culture at Michigan never worked.

And it was never worse than in 2008. There was a brief moment of hope when the Wolverines rallied from 19-0 down to beat Wisconsin in the conference opener. Otherwise, the year was a disaster. Michigan finished 3-9.

THE COLLAPSE OF WISCONSIN

Speaking of Wisconsin…the Badgers suffered through their worst season of Bret Bielama’s otherwise successful six-year run in Madison and one of their worst since the renaissance under Barry Alvarez started back in 1993. The meltdown in Michigan was just one part of the disappointment.

They played Penn State in a prime-time game in October. This writer, a Wisconsin fan, was in attendance with a Penn State friend. It was a long night for me as the Badgers lost 48-7. Wisconsin lost to every notable team in conference play–Penn State, Ohio State, Michigan State and Iowa. And the worst embarrassments would come at the end.

A non-conference visit by Cal-Poly closed the year. A school whose football program was otherwise only known for as the college destination of Tom Cruise’s character in All The Right Moves, would have beaten Wisconsin if not for an inability to make extra points. The Badgers survived 36-35, but that barely mitigated the national embarrassment. A bowl game against Florida State was a 42-13 loss.

2008 was Mark Dantonio’s second year in East Lansing and the Spartans started to show the signs of life that would turn them into a consistent contender over the next decade. Javon Ringer ran for over 1,600 yards and was 1st-team All-Big Ten. They had a shot at a piece of the conference title until a loss at Penn State in the season finale ended this hopes.

More important, they began to assert themselves in their rivalry with Michigan. One year earlier, Wolverine running back Michael Hart infamously called Sparty the “little brother” in the rivalry. Dantonio publicly vowed that Michigan would eat those words. The head coach started backing that up in 2008 when he went to Ann Arbor and posted a 35-21 win. Michigan State would have more than its usual share of good moments against their rivals in the years ahead.

Penn State has traditionally been known as Linebacker U and their 2008 defense was led by NaVorro Bowman, who was en route to a career as one of the NFL’s top linebackers with the San Francisco 49ers. One can only imagine how good the Lion defense might have been if Sean Lee, another man with a long NFL career ahead of him, hadn’t been injured in preseason.

But the linebacker who copped Big Ten Defensive Player of the Year honors was in Columbus. James Laurinatis keyed the Buckeye defense and would enjoy an NFL career of his own with the Rams.

There was other great defensive talent in the league–top defensive backs included Vontae Davis at Illinois and Ohio State’s Malcolm Jenkins. Mitch King from Iowa was a terrific defensive lineman. But it’s the linebackers who stood out.

They weren’t the best team in the conference, but no team was more impactful nationally than Iowa. The Hawkeyes ended Penn State’s bid for a national title in November when they rallied for a late field goal and a 24-23 upset. Iowa produced the Big Ten MVP in running back Shonn Greene, who ran for over 1,800 yards. And they were the only conference team to win a bowl game. Iowa’s 31-10 victory over Steve Spurrier’s South Carolina team in the Outback Bowl was the only bright spot of a rough postseason for the conference.

In 1979  we celebrated the city of Pittsburgh for the championships of the Pirates and Steelers. We’re going back to this market in 2008, but with a different twist. There’s still a Super Bowl champion Steeler team anchoring the sports year. Only now we shift to hockey, where the Penguins reached the Stanley Cup Finals.

And we’re going to another little twist—this applies only to those Pittsburgh fans who live in the central-western part of the state, where college football loyalties go to Penn State. The Nittany Lions won the Big Ten title and went to the Rose Bowl, in what we now know to be Joe Paterno’s final appearance in a major bowl game.
We should also note that it wasn’t a bad year for the central-east part of the state either—you still had Penn State, and the Philadelphia Phillies won the World Series. But Pittsburgh and Philly are too far apart to have too many crossover fans, so you have to tilt one way or the other. The Penguins success shifts the balance of power west when it comes to top fan market of 2008.
While future success is not a requirement for winning this award, it should be noted that the Penguins’ run to the Finals looks all the better in light of the fact that they returned a year later and finished the job. The Steelers made it back to the Super Bowl two years later, though 2008 was their last title. Only Penn State football, which saw the unspeakable crimes of Jerry Sandusky, and the subsequent media effort to tarnish everyone associated with the program, did not have better days ahead.
For one year in 2008, the Penguins, Steelers and Penn State all came together to make central-west Pennsylvania a truly Happy Valley.
Read more about the 2008 Pittsburgh Steelers
Read more about 2008 Penn State Football
Read more about the 2008 Pittsburgh Penguins