WHY BOSTON SHOULD PLAY IT SAFE 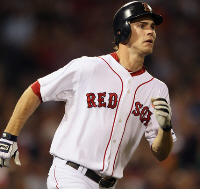 The trade deadline is now just 2 ½ days away and as usual, there are a lot of rumors flying around about what Boston may do. With the Red Sox leading the Yankees in AL East and the smart money favorite to win the AL pennant in October, there’s pressure on GM Theo Epstein to do something. I would argue differently. The best thing Epstein can do for this organization right now is to stand pat.

Boston made their “deadline moves” several months early. They took a big contract in going after Carl Crawford and luring him from Tampa Bay. The dealt away prospects to get Adrian Gonzalez and then locked him up to a long-term contract extension. Whether its spending money or investing prospects, no one can accuse the Red Sox front office of giving this season short shrift.

But there are some injury issues to be concerned with and run-of-the-mill problems that every team has that may prevent the $163 million roster from completing the run to October glory. The most serious is the back trouble of Clay Bucholz. The reports keep coming out that the injury isn’t serious and that his workouts are going well. For a non-serious injury that’s being effectively rehabbed Bucholz seems to be out an awfully long time and making a lot of extra trips to see out-of-town doctors. Count me among those that are skeptical if the Red Sox are being entirely straight with their fan base (a group that I’m a proud member of, in the interests of full disclosure).

Shortstop is also a problem, with Jed Lowrie unable to stay healthy and Marco Scutaro being much better as a utilityman than an everyday player. Rightfield has been a prominent part of trade discussion, as J.D. Drew’s poor year and usual assortment of injuries created a void that so far has been ably filled by young Josh Reddick. But do the Sox want to go into the postseason with an untested outfielder?

The answer to the latter question is “Sure, why not?” Boston won the 2007 World Series with Jacoby Ellsbury, a late-season callup, starting in center. If Houston’s Hunter Pence is available for two top prospects that might be a deal worth listening too, but from all indications the Astros correctly want a richer package. Other solutions, from Josh Willingham to David DeJesus to Jeff Franceour are stopgaps and I’d rather see the Sox just stick with Reddick and hang on to the better minor leaguers. The shortstop concern is a legitimate one, but it’s also not an emergency and it doesn’t look like anyone is realistically available. If Boston is that concerned, a wiser course would be to wait until the offseason when Jose Reyes hits the free agent market and make him an offer he can’t refuse.

Finally we come to pitching. A rotation that has John Lackey in the #3 spot, with Andrew Miller and Tim Wakefield filling it out, has its share of problems. From a trade standpoint, there just isn’t an arm on the market that’s worth digging further into a farm system that was already strip-mined to get Gonzalez in town. It would be the height of shortsightedness to give up two Grade A minor leaguers to get, for example, Hiroki Kuroda or Wandy Rodriguez. If someone like the Dodgers just wants to unload Kuroda’s contract and take pennies on the dollar in terms of players, then sure, make the deal. But there are times a team has to be willing to say “if such-and-such happens, it’s just not our year.” And if the Red Sox can’t go into October with a healthy trio of Bucholz, Josh Beckett and Jon Lester than it probably isn’t there year. Desperately trying to fix it will only make the problem worse in the long run.

Cleveland is a town that loves good football at every level, from the NFL right down to grade school. But Friday and Saturday have been better than Sunday in recent years. The Browns haven’t made the playoffs since 2002 and are coming off a 5-11 year that resulted in Eric Mangini’s firing. The Browns were often competitive, but couldn’t get over the hump. Is there any reason to think this year will be different?

The biggest problem I see with this team is on the offensive lineman. Joe Thomas at left tackle is outstanding, one of the best in the game, but there’s really no one else besides him. At the very least, quarterback Colt McCoy has someone who can protect his blind side, but pressure will come from everywhere else and it’s going to be tough to run the ball consistently.

Peyton Hillis was a revelation at running back last year and had a good year in spite of the line problems. But he did it by taking a heavy pounding and just churning forward. It’s tough to keep doing that at the NFL level and it’s tough for a back to get yards in situations where everyone in the stadium knows a running play is coming without help from the offensive front.

Defensively, Cleveland will shift to a 4-3 scheme, a move that will require the defensive ends to be playmakers rather than funnel plays to the linebackers, as is the case in the 3-4. Rookies are going to get their chance as Baylor’s Phil Taylor and Pitt’s Jabal Sheard with chosen with the new alignment in mind and will have every opportunity to play right away. The linebacking corps is getting long in the tooth, but is competent. Health will tell the story in this area.

The secondary has a couple of exciting young players in safety T.J. Ward and corner Joe Haden. Together with the rookies up front, they form the foundation of this defense’s future. The size of the learning curve is what has to be watched this season.

Cleveland’s front office was taken over by Mike Holmgren, who coached both Green Bay and Seattle to Super Bowls, winning the 1996 title with the Packers. But his stint as general manager/coach in Seattle wasn’t that good and it wasn’t until he was relieved of his front-office duties that he got the Seahawks to the 2005 Super Bowl. Now Holmgren, the brilliant coach, can’t bail out Holmgren the GM. It’s going to be up to rookie coach Pat Shurmur to do that.