The Big Apple gets the attention of the Notebook today, with a look at Derek Jeter's recent play, along with the preview for the Giants.

JETER TURNS HIS SEASON AROUND 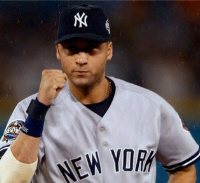 Derek Jeter opened the season under pressure, having just signed a three-year $45 million contract, in spite of a subpar 2010, a deal that led some to wonder if the notoriously hard-hearted Yankee front office was giving into sentiment to keep the Captain happy.

A start to the season that was poor by any standard, but absolutely atrocious by Jeter’s, added fuel to the fire. Then he was elected as the All-Star game starter, an affront to anyone who believes that current performance should be the measuring stick for such an honor. Jeter went to the disabled list, temporarily halting his bid for 3,000 hits and the Yankees played some of their best baseball of the season in his absence.  Finally, just before the All-Star break the old Jeter returned.

The day he got his 3,000th hit was nothing short of an epic. The hit itself was a home run; he went 5-for-5 and drove in the game-winner against Tampa Bay. It was one more notch on Jeter’s Hall of Fame belt. To some of us, it looked like a great day for a once-great player that would hold a deserved place in baseball history, but nothing more. But in fact, it’s sparked a turnaround of the shortstop’s entire season.

Over the last month, Jeter is hitting close to .300. Over his last ten games, he’s collected 12 hits. The power is still way down from what it was even a couple years, but his on-base percentage is now up to a respectable .337. While I still believe the Yanks would be better if Brett Gardner were the full-time leadoff man, the issue is now longer as cut-and-dried as it was in June.

What’s most impressive though is Jeter’s defense. His range had long drawn the fire of the sabermetric community and defensive metrics are an area the Notebook is completely in agreement with the number-crunchers on. But those same numbers began to improve after Joe Girardi took over as manager in 2008, a development that lends credence to the theory that Girardi is a better baseball man than his illustrious predecessor, while Joe Torre’s primary skill was to be the house psychologist in an atmosphere that required it.  And this year Jeter is far and away the best among American League shortstops in zone rating, the Notebook’s preferred stat when it comes to measuring range.

As we come into the last two months of the season, Jeter brings a profile that shows an improving bat, better consistency at getting on base and outstanding range in the field. We’ll have to see if the 37-year old Captain can sustain it, but for someone most of us figured was washed up, it isn’t bad. And for those of us who take pride in our loathing of all things Pinstripes, Jeter’s still the last person you want to see in the box in October with two on, two out in a one-run game.

*The Yankees are currently at 9-2 odds to win the World Series. Betting action on futures and game-by-game is available at Legends Sportsbooks. 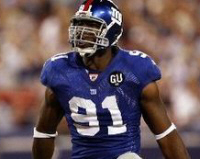 The Giants went to Green Bay last year with their playoff hopes on the line in the season’s penultimate game and were ripped apart by an Aaron Rodgers’ avalanche, a rout that sent the Packers into the postseason and Super Bowl glory while New York went home. Ultimately though, New York was done in by a failure to play consistently all year long and were bedeviled by constant turnover problems.

Eli Manning was the culprit, throwing 25 interceptions and what was always true, even in this team’s 2007 Super Bowl run, should be apparent now—Eli is not a real difference-maker at quarterback. If you put him with a team that has a physical, durable offensive line that can establish the run and protect the passer, he can function. If you put him on a team with a defense that pressures the opposing quarterback constantly and keeps games manageable, Eli can do just fine. He’s no worse a quarterback than he was in 2007, but the infrastructure around him, especially up front is suffering wear and tear.

The offensive line was a hallmark of consistency and health, but the injury problems to Shawn O’Hara and Rich Seubert last year broke that up. New York has brought in David Baas to play center and if all goes well, they still have enough line talent to be respectable, but this isn’t a unit that’s going to blow people off the ball. The same is true on defense. Even if Osi Umeniyora gets his wish and is traded out of town, Justin Tuck and Mathias Kiwanuka can come off the end and pressure the passer in the 4-3. But the interior of the line is weak and the linebackers are soft. If opposing offenses can’t control the edge, they can run traps and draws up the middle to keep Tuck and Kiwanuka neutralized.

Tom Coughlin’s secondary is above average, another area that’s better on the corners than up the middle, with top draft choice Prince Amukamura joining Corey Webster and Terrell Thomas on the outside. Coughlin needs Antrel Rolle to have a big year at free safety if this going to be a really good unit.

As much as any coach in the game, Coughlin knows championships are won in the trenches, and his lines are getting old on him. He’s got playmakers at the skill positions, with Mario Manningham, Hakeem Nicks and Steve Smith at receiver and a good two-pronged running attack with shifty Ahmad Bradshaw and battering ram Brandon Jacobs. Using those weapons will be a lot easier if the coach can get his vets to win the battle up front for another season. I like Coughlin, but I’m not optimistic about his chances this year.

*The Giants are a 3-1 shot to win the NFC East. Bet on this and other propositions at Legends Sportsbooks.

Legendary head coach Bobby Bowden was at the peak of his power when the 2000 season began. His Florida State program was on an amazing run of 13 consecutive seasons finishing in the national top five. They had won or shared the ACC title every year since joining the league in 1992. What’s more, Bowden […]

2000 Miami Hurricanes: The Return Of The U

The University of Miami had become known as simply “The U” thanks to their dominance in the 1980s and the early 1990s. They won four national titles, and narrowly missed several others. They played with a swagger that made them a national brand. But the mid-1990s saw the ‘Canes slip, even to the point of […]

In 1999, Virginia Tech had produced its greatest football season ever. A program that had been gaining steam for several years–a major bowl victory in 1995 and another appearance in a marquee bowl a year later—had gone to the next level when dynamic freshman quarterback Michael Vick arrived on campus. Vick got the Hokies to […]

It was 1995 when Northwestern shocked the college football world by winning an outright Big Ten title and going to the Rose Bowl for the first since 1948. Almost as improbably was the Wildcats following that up in 1996 with a share of the conference championship. But after two losing seasons, and the departure of […]