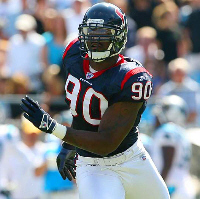 After a 6-10 year in 2010, I’m surprised to see Gary Kubiak still on the sidelines for Houston. The Texans regressed badly in ’10. After three straight seasons at .500 or better, they not only slumped back, but did so after a promising start that included a home win over Indianapolis. But Kubiak will get another chance to get this franchise its first playoff berth and the housecleaning was done with defensive coaching staff. The new man in town is former Dallas head coach Wade Phillips, who will transition from a 4-3 defense to a 3-4 in the hopes of getting some help for this team’s solid offense.

I understand why Phillips is making the schematic switch because that’s what he coaches best. And while his tenure in Dallas may have ended on about as low a note as there could be—last season’s complete collapse with an utter humiliation in prime-time at Green Bay spelling the end for Phillips—he has been a successful defensive coordinator over the years and over time there’s reason to think he can succeed here.

But the best talent on this defense is at end and that’s best suited to a 4-3, with two pass rushing ends collapsing the pocket while a pair of tackles tie up the middle. Mario Williams and Antonio Smith are solid on the edge and the Texans invested their first round pick Wisconsin’s DE J.J. Watt. Why do this if they’re going to a system that de-emphasizes the ends and favors the outside linebackers? It makes even less sense when you consider the linebacking talent is better suited to the 4-3. Demeco Ryan and Brian Cushing are the best LBs and they both play on the inside, where competent tackling, rather than playmaking blitzes are the most important.

Again, I’m not criticizing Phillips for making this change. Dom Capers did the same thing when he came to Green Bay in 2009, de-emphasized what was then a star end in Aaron Kampman and ultimately moved linebacker Clay Matthews to prominence and won a Super Bowl with an outstanding defense last year. But don’t forget that the experiment didn’t start off well—for much of ’09 the Packer defense was a sieve. Capers and head coach Mike McCarthy had job security and could ride it out. Kubiak doesn’t have the comfort zone and it will be interesting to watch how this plays out.

If nothing else, the Texans can always score points. Matt Schaub has thrown for 4,000 yards for two straight years and has a great weapon the outside in Andre Johnson, as well as with tight end Owen Daniels. They got run support from Arian Foster last year and are a very solid offensive unit. But going into 2011, they’re not as interesting a storyline as is the development of a new defense that Kubiak has staked his job on.