WHY WOULD SEATTLE TRADE FELIX?

Seattle concludes a three-game series in the Bronx this afternoon, as they send Felix Hernandez to the mound to try and stop a 16-game losing streak. Yankee fans are hoping the game provides a look at their future, as Brian Cashman has been trying to work a deal for the 25-year old Cy Young winner for some time now and the thought is that the Seattle collapse may make King Felix available.

Am I missing something here? It’s not as though Fernandez is a guy at the end of his career who couldn’t be a part of a Mariner rebuilding project. Does the phrase “25-year old Cy Young winner” mean anything. What possible interest does Seattle have in trading the star righthander with the limitless future?

Not much apparently, because Seattle GM Jack Marchand squashed the rumors, essentially saying he doesn’t care if New York (or anyone else) empties their entire farm system. Fernandez is not available. GMs notoriously lie at this time of year, but common sense would indicate this isn’t one of the cases. Rebuilding make teams make trades to get young talented pitchers who can be a part of the team for the next 5-10 years. Like, for example, Felix Hernandez.

Seattle has plenty of starting pitching to back up Hernandez. Michael Pineda is a talented rookie who made the All-Star this year (and actually deserved it, in a year when there were more All-Stars than Dick Vitale has locks for the NCAA Tournament). Doug Fister’s won-loss record is only 3-11, but that’s due to a lack of support. Jason Vargas is a respectable back-end starter. There’s depth in the bullpen.

The problem lies on offense,where the Mariners are absolutely woeful. The rebuilding pieces are first baseman Justin Smoak, who was having a nice year until his numbers tanked during this recent skid. Second baseman Dustin Ackley, a midseason callup, is swinging a very good bat. Over at short, Brendan Ryan is at least functionable. The big disappointment—to say the least—is third baseman Chone Figgins. Once one of the most dynamic leadoff hitters in baseball with the Angels, he’s done less than nothing in the year and a half since he got big money to sign with Seattle. The M’s are desperate to be rid of his contract.

Putting Figgins on the market would make sense for both Seattle and a contender. The third baseman isn’t that far removed from his productive years and he may just need a change of scenery. Seattle could use the payroll flexibility. Another possible trade chip is Erik Bedard, the starting pitcher who could be a legitimate #2 if only he stayed healthy. It looks like injuries will again preclude a deal here, but if Seattle can find someone willing to take a risk, Bedard could at least bring back one decent prospect.

Cautious change, rather than throwing the baby out with the bathwater ought to be the order of the day in Seattle. The team desperately needs offense, but they aren’t a hopeless case. And trading away the best young pitcher in baseball would be bizarre to say the least. 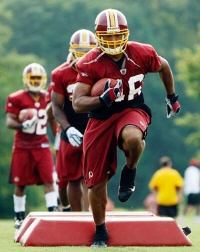 It took a long time and a lot of wrangling, but we’ve finally got real football to talk about. As expected, cooler heads prevailed in the lockout talks and no one was willing to risk the billion$ the NFL brings in each year.

I mostly sided with the players during this saga. More than any other union, the NFLPA has worked with management, rather than against them, to strengthen the league as a whole. The NFL has revenue sharing, a salary cap and the financial tools for small market teams to succeed, because the New York franchises are more visionary in this sport than they are in baseball and because the players have recognized that their financial success can only happen within the context of a growing and dynamic league where every market can have hope of being competitive—or if they can’t, they at least know to blame their own front office and not the economic system.  The fact the players union has worked with the owners should have been rewarded and not confronted. More instrangient unions, such as the one in Major League Baseball can’t be blamed if they note the way their football counterparts got walked all over and continue their own unhelpful posture.

But at the end of the day, it was truly hard to sympathize with either side. The small-market owners wanted more money. Rather than share out greater percentages, the big-market owners decided it would be easier to get it from the players. And the NFLPA walked away from the one genuinely noble cause in this financial fight and that’s better rewards for the older players who built the league before the big money started coming in. I might have taken the union’s side, but when you see greed like that set in, it certainly becomes a lesser of two evils choice, rather than an actual good.

Fortunately it’s all over and we can back to football. Tomorrow team previews will start here at the Notebook and we’ll have daily previews and division picks right up to the September 8 opener in Lambeau Field when Green Bay hosts New Orleans. Look forward to seeing you back here and finally talking about the on-field part of football again.