It was the era of Bobby and Bo, when Indiana basketball and Michigan football were the standard-bearers in the Big Ten and there was plenty of competition chasing them from behind.

Bob Knight’s Indiana basketball program won four conference titles in the 11-year stretch from 1978-88 and two national championships. The Wolverine football program run by Bo Schembechler went to the Rose Bowl five times in the same period and gave Schembechler his only two wins in Pasadena.

But while Knight and Schembechler were the frontrunners, there was so much more to this era. The 1980s in the Big Ten were preceded by Magic Johnson blazing on the scene at Michigan State and bringing an NCAA basketball title to East Lansing. Hayden Fry’s Iowa program had a breakthrough year in 1981, reached the Rose Bowl and leveled the conference playing field. In the ensuing years, Illinois and Michigan State would also make long-sought trips to Pasadena.

Purdue emerged on the basketball court, with Gene Keady consistently getting his team into the conference race and bringing trophies to West Lafayette, even if he never could quite get over the hump in March.

All of that and more is here in this page. There are links to seasonal articles on the best teams in both football and basketball from each year.  Read on and experience what it was like to be in Big Ten Country during the 1980s. 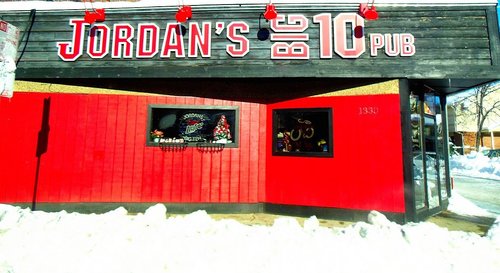 It was a good year to be in East Lansing. The Michigan State basketball program was bolstered by the arrival of a freshman point guard named Earvin “Magic” Johnson. The Spartans won the Big Ten and reached the regional finals of the NCAA Tournament.

Michigan State football, with Kirk Gibson playing wide receiver, shared the conference title and normally would have gone to the Rose Bowl. Alas, they were on NCAA probation, so fellow co-champ and archrival Michigan got the nod for Pasadena.

The Magic was back in East Lansing and college basketball belonged to Michigan State. It took the Spartans a little while to get going and they shared the conference title three ways, with Iowa and Purdue, but Michigan State ultimately won the national championship over Larry Bird’s Indiana State.

Ohio State was going through a changing of the guard in football. After the firing of the legendary Woody Hayes, the program was in the hands of Earle Bruce. In his first year, Bruce reeled off an undefeated season and nearly won a share of the national title before a crushing Rose Bowl loss.

It was a year of comebacks for legendary coaches. Michigan football was coming off a down year in ’79 and then started 0-2 this season. But Bo Schembechler’s team turned it around in conference play and won the Big Ten title outright. Then they got Bo his first Rose Bowl win in six tries.

Bob Knight’s Indiana basketball program had gone through a rough year in ’79 as well. Despite suffering through some key injuries, the Hoosiers made a strong push at the end to win an outright league title, with freshman Isiah Thomas at the point and Mike Woodson leading the way down the stretch.

For the second time in three years, the Big Ten cut down the nets at the Final Four behind the play of a sophomore point guard destined for NBA greatness. Isiah was back in Bloomington and Indiana again rallied down the stretch to win an outright Big Ten championship. The Hoosiers were even better in the NCAAs, demolishing all comers and securing Knight’s second national title.

College football had a whacky year in 1981 and the Big Ten was not exempt. Michigan opened the season #1 in the nation, but did not live up to expectations. Instead, it was Iowa who got in the race, shared the conference title with Ohio State and the Hawkeyes made an improbable trip to the Rose Bowl.

Michigan was back on the football field. They took their usual formula of a physical running game and tough defense and augmented it with Anthony Carter, one of the nation’s most explosive receivers with an NFL future ahead of him. The Wolverines won a hard-fought game at Illinois and a scheduling oddity ensured that their season-ending loss at Ohio State didn’t matter.

Minnesota basketball only had one notable season in a 16-year stretch from 1973 to 1988. That season would be this year and it was a championship run. Randy Breuer, the big 7’3” center anchored the middle, while Trent Tucker and Daryl Mitchell were in the backcourt. The Gophers closed with four straight wins, including victories over Iowa and Ohio State that ensured Minnesota’s conference title would be outright.

Indiana made another memorable late-season push. The Hoosiers won their final three games with leading scorer Ted Kitchel out with a back injury. Those wins all came against conference contenders and the last one was a winner-take-all battle with Ohio State on the final Sunday of the regular season, the second time in four years the Hoosiers had bested the Buckeyes in such a scenario.

The football race was no less compelling. Michigan and Ohio State were both their usual selves, but Illinois was even better. The Illini won a big November home game over the Wolverines to all but secure the Rose Bowl bid. Illinois defensive tackle Moe Gardner’s dominant year was recognized with conference MVP honors.

The strong run for Illinois athletics continued and this time it was the Illini basketball program making the noise. A balanced lineup, with a backcourt of Bruce Douglas and Doug Altenberger, combined with power forward Efrem Winters up front led Illinois to share the conference title with feisty Purdue. Illinois went on to come within a basket of the Final Four in a controversial loss to Kentucky.

Ohio State had gotten some momentum back in ’83 when they won the Fiesta Bowl and that resulted in a Rose Bowl return in 1984. Future NFL names like Cris Carter, Keith Byars and Jim Lachey dotted the lineup. Mike Tomczak at quarterback would also last in the NFL. Michigan was having a down year and when the Buckeyes administered a 21-6 win, they were going back to Pasadena.

A 1 vs. 2 battle between Iowa and Michigan on the football field had the Midwest buzzing. The Hawkeyes won a thriller and even though they later lost to Ohio State, made their second Rose Bowl appearance of the decade. The Wolverines went on to a big Fiesta Bowl win and #2 finish in the national polls.

The Michigan basketball program emerged after being in relative obscurity since 1985. Head coach Bill Frieder recruited a collection of talent that was headlined by center Roy Tarpley. Keyed by a dominant year from Tarpley, along with great backcourt play from Gary Grant and Antoine Joubert the Wolverines ran away with the conference title.

For the first time in ten years, one school swept both the basketball and football titles and did it outright. Just like in 1977, that school was the University of Michigan. On the basketball court, the Wolverines beat back a challenge from Indiana and blew out the Hoosiers in the final regular season showdown that settled the championship. For IU’s part their season would become immortalized in A Season On The Brink, the best-selling sports book of all-time.

Jim Harbaugh was a Michigan quarterback in 1986 and no less outspoken than he would be in later years as the program’s head coach. Harbaugh guaranteed a win over Ohio State when the two rivals went head-to-head for a Rose Bowl bid. And he backed it up, as the Wolverines survived with an exciting win.

Big Ten basketball was exceptionally strong and four teams made significant waves nationally. Iowa rose to #1 in the country during the regular season. Illinois spent the regular season looking like a Final Four threat. Purdue had a collection of juniors come together and were poised to win the conference outright until a loss in Ann Arbor opened the door to the fourth team. That was Indiana, who shared the league crown with the Boilermakers and then went on to win Bob Knight’s third national championship in March.

The football world was turned upside down. Indiana was involved here too, with a historic parlay of beating both Michigan and Ohio State in the same year. But the best team was from East Lansing. Michigan State, keyed by a great defense and a superb running back in Lorenzo White got the Rose Bowl bid—and then did something even rarer for Big Ten teams in this era. They actually won in Pasadena.

Gene Keady was looking for a March breakthrough at Purdue. The Boilermakers had been a consistent conference contender, but hadn’t gotten out of the first weekend of the NCAA Tournament. The ’88 Purdue team was led by Everette Stephens, Troy Lewis and Todd Mitchell and looked to be the best of them all. They ran away with the Big Ten championship. They reached the Sweet 16. Only a shocking tournament loss denied them a bigger legacy.

On the football field, Bo was looking for a January breakthrough and one of his best teams gave it to him. Michigan lost their first two games, but both were narrow losses to Notre Dame and Miami, the two best teams in the country. The Wolverines won the rest of their games, easily took home the conference title and then surprised college football observers by knocking off USC in the Rose Bowl.