The trade rumors are done flying and it’s time for the final two-month push to the finish line and the National League has two great series that got started last night in the Central and West Divisions. St. Louis visits Milwaukee, while Arizona hosts San Francisco.

No team is more heavily mortgaged to win this year than the Brewers. Having already strip-mined their system to get Zack Greinke, Milwaukee went on to add Francisco Rodriguez and Jerry Hairston. They’re in first place right now, but the home/road splits have to raise alarm for any Brewer fan. At the friendly confines of Miller Park, they’re 39-14, the best home record in the game. But leave Milwaukee and they’re only 21-35. If that pace continues, Milwaukee would go 10-15 in its remaining road games. Can they play well enough at home to hold off St. Louis and Pittsburgh? Not likely and the Brewers might have to take a lesson from the nearby Green Bay Packers about how to win away from home. When this current series with St. Louis wraps on Wednesday, Milwaukee’s last 50 games will be evenly split, home and away, so there’ll be no hiding.

St. Louis added Edwin Jackson to give themselves some rotation depth, but they still don’t have a true closer and are faced with the challenge of trying to slug their way to the playoffs, behind the top offense in the National League. With Albert Pujols, Matt Holliday, Lance Berkman and David Freese that’s more possible than for most teams, but it’s not a comfortable spot to be down the stretch. Chris Carpenter is getting into a good groove–or at least he was until he gave up five runs in the fifth last night–and Jaime Garcia is solid, but there’s still a lot of pressure on Jackson and Kyle Lohse coming into the homestretch.

Arizona is the team quietly hanging around in the National League. Just when you’re ready to chalk in San Francisco for the NL West and Atlanta for the wild-card and evaluate their deadline moves solely in terms of postseason impact, you look at the standings and realize those pesky Diamondbacks are lurking in striking distance from both teams. The D-Backs got some back-end help for the rotation in Jason Marquis and added depth to the bullpen, but at this point the single biggest factors going for them are this—similar to St. Louis, they can hope that one big hot surge from their offense could set off a nice 10-2 run that would push them over the top. And with Kirk Gibson as their manager they won’t be allowed to quit. That can be trite to say but when you have talent that hasn’t yet proven itself in a big situation, the intangible factors can be a big deal.

San Francisco did everything it could realistically do at the deadline without selling off their entire future. They got the big bat in Carlos Beltran, and they made some nice additions to the middle infield with Orlando Cabrera and Jeff Keppinger. Neither one will set the world on fire, but considering the Giants were in woeful shape up the middle, they now at least have players who can field the positions competently. Which on a team with this kind of pitching staff means an awful lot.

At the start of the season the Notebook picked Milwaukee and San Francisco to win their respective divisions. Obviously there’s no reason to change course now and both leaders are in the midst of key August tests. 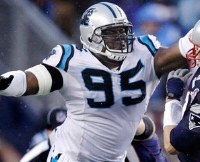 One of the rituals for fans and prognosticators in August is to wonder who it will be. Who’s the team that’s going to come out of nowhere and shock everyone with a run to the playoffs? The defining example of this was the 2008 Miami Dolphins going from 1-15 to AFC East champs. The following year Cincinnati slipped past Pittsburgh and Baltimore and stole the AFC North crown. Kansas City stepped up and won the AFC West last year. If you’re looking for a surprise candidate in 2011, Carolina merits at least a look.

As much I respect departed coach John Fox, he had clearly run his course in Charlotte. The organization will be better off with an infusion of fresh blood with Ron Rivera. The Panthers are decent in both lines. If right tackle Jeff Otah is healthy they’ll be good on the perimeter of both lines, between offensive tackle and defensive end, with talents like left tackle Jordan Gross and pass-rushing end Charles Johnson. Control the edges up front and you have a chance to make big plays on either side of the ball.

Defensively the Panthers have a couple good young safeties in Charles Godfrey and Sherron Martin who can start to make some of those big plays. Corner could be a potential trouble area and Chris Gamble has to step up and play well. The linebackers are competent, albeit not great, but with the aggressiveness being provided by the ends, the LBs just need to tackle consistently.

Carolina can also run the ball consistently with the two-pronged attack of DeAngelo Williams and Jonathan Stewart. And you can mix in Mike Goodson and Tyrrell Sutton who can help on third-down passing situations.

So we look at the Panthers and see a team capable of playing pretty good defense and having a decent running game. If they do that they’ll be competitive again. Whether they become the surprise team of the league depends on whether they get a passing game together. Cam Newton, the top overall pick in the draft, has lost practice time due to the lockout and seen his development set back. I’m a believer in Jimmy Clausen, but I think that would make me a minority of one within the Carolina organization. The receiving corps is dependent on the mood and health of vets Steve Smith outside and Jeremy Shockey at tight end.

There’s no shortage of question marks, as befits a team that went 2-14 a year ago. But there are plenty of reasons to think the Panthers can be better. Even if they have inconsistent quarterback play, thinking they can win eight games this year is hardly unreasonable.