The 1993 Notre Dame football team was coming off a Top 5 finish in 1992, where the Irish finished 9-1-1 in the regular season and then blasted Texas A&M in the Cotton Bowl. Under the leadership of head coach Lou Holtz, Notre Dame had been to a major bowl game every year since 1987, won the national title in 1988 and finished #2 in 1989. Even though expectations weren’t high for 1993, that’s all relative and “low expectations” still meant a Top 10 preseason ranking.

READ ABOUT THE LOU HOLTZ ERA AT NOTRE DAME 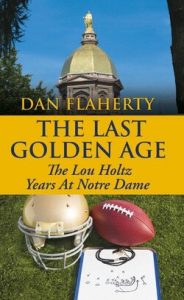 After an opening win over Northwestern, ND went to Michigan who was ranked #2. It was supposed to be a whipping and it was—but for Notre Dame. The Irish dominated on the ground and led 27-10 in the second half. A goal-line stand and subsequent 99-yard drive allowed Michigan to pull closer and Notre Dame had to preserve a 27-23 win by covering an onside kick. It was still a game not nearly as competitive as the final score made it look, and it wasn’t the last time the Irish would win a big game in such fashion.

They won three games over Michigan State, Purdue and Stanford (none of whom were very good at this point) and Notre Dame was 5-0, ranked fourth in the nation and pointing to a November 13 showdown with top-ranked Florida State in South Bend.

Notre Dame rolled unabated towards its showdown with Florida State. The Irish beat Pitt 44-0, won an ESPN night game at BYU, took out USC 31-13 (the Trojans at this point just an above-average team) and then beat Navy to end October. Holtz had two weeks to get ready for FSU and the college football world was tuned in.

The November 13 game decisively changed the way we view college football in one way. The magnitude of this game led ESPN’s Gameday crew, still hosted by Chris Fowler and including Lee Corso, to do its first-ever on-scene show, setting up shop in South Bend. It worked so well that Gameday is done on live from somewhere every week now. The Seminoles had Heisman Trophy winner Charlie Ward and were so well-regarded that Notre Dame was a 14-point underdog on their homefield with two weeks to prepare, and being #2 in the nation.

Just as they’d done against Michigan, the Irish came out hitting in the trenches. After Ward led an opening drive for a Florida State touchdown, the Notre Dame line took over. Receiver Adrian Jarrell took a reverse 32 yards for the tying touchdown and two more rushing TDs made it 21-7 at half.

With a defensive lineup that included All-American choices in tackle Bryant Young and defensive backs Jeff Burris and Bobby Taylor, along with Lombardi Award winner Aaron Taylor on the offensive line, the Irish were showing they had some talent themselves.

Notre Dame maintained a steady control of the game and it was 31-17 in the fourth quarter. On 4th-and-20 around midfield Ward fired a pass down the middle. A Notre Dame defender batted it in the air and through a fluke play it ended up as first down for FSU. They got a touchdown, and upon getting the ball back rallied down to give Ward two cracks at the end zone from just outside the 10-yard line.

The first pass was knocked down. On the second Ward sprinted to his left and forced the ball into coverage. Defensive back Shawn Wooten batted the ball to the ground and Notre Dame had won 1993’s version of The Game of the Century.

Notre Dame was now the consensus #1 and the country was ready to watch them play undefeated Nebraska in the Orange Bowl, but the Cornhuskers were not given any respect, so that’s really a way of saying most everyone assumed ND would roll to a national title.

But Boston College had something to say about that. Still steaming over a 54-7 loss to the Irish the previous year where Holtz ran a fake punt in the second half, BC’s fine passing offense with Glen Foley came out firing early and often and led 38-17 in the fourth quarter. Suddenly the Irish awoke and took a 39-38 lead with less than a minute to play.

A foolish personal foul penalty on the kickoff handed Foley fifteen extra yards, he moved the Eagles into field goal range and a David Gordon field goal that won it became a great moment in BC history and an infamous one for Notre Dame. It put “The Holy War” between the two Catholic schools playing at the FBS level on the map. And it put Notre Dame into a bind heading into New Year’s Day.

Notre Dame got a Cotton Bowl rematch with Texas A&M, who was 10-1 and ranked #7. The Irish were at #4, trailing unbeaten teams in Nebraska and West Virginia, along with Florida State. The Seminoles were inexplicably ranked #1, against a team they had lost to and two more that hadn’t lost. The voters seemed to have decided Florida State was the best team and actual on-field results be damned.

Florida State would play Nebraska in what appeared to be the game that would settle the national title in the Orange Bowl. But West Virginia would have a case if they could beat Florida in the Sugar. And Notre Dame was preparing its case, with Holtz reminding the media that if, when the bowls were done, if no team was undefeated, it left Notre Dame and Florida State as the only ones among the one-loss teams that would have won a bowl game. And who pray tell, had won the head-to-head matchup in November, a game not as close as the 31-24 final score makes it sound?

Texas A&M was a hungry team in the Cotton Bowl as they looked for some national respect and as the mid-afternoon battle seesawed back and forth it looked like all of Holtz’s best arguments might not matter. After the Irish ran it down the Aggies’ throats for a first-drive touchdown, A&M responded with two of their own and it was 14-7 at half.

Notre Dame opened the second half the same way they opened the first, with the pounding running game of halfback Lee Becton and fullbacks Ray Zellars and Marc Edwards getting the job done and tying the game. It was the ground game where ND would have a decisive edge, doubling up on A&M in yardage, 206-103. The teams swapped touchdowns and it went into the fourth quarter at 21-21.

A key sequence then began when Irish linebacker Pete Bercich picked off sophomore quarterback Corey Pullig. It was one of three Aggie turnovers to zero for the Irish and this one happened around midfield. Though the Notre Dame offense couldn’t do anything, their punt did pin A&M. After the defense held firm, Notre Dame punt returner Mike Miller made the decisive play, fielding a punt around midfield and returning it deep into Aggie territory. It set up a field goal with five minutes that made it 24-21.

A&M had a rally left in them and got to midfield, but a big sack all but sealed the Cotton Bowl win for the Irish. They had done their part. Now it was time to hope Florida and Florida State could beat the two unbeatens.

Florida blew out West Virginia in the Sugar Bowl, while the Orange Bowl was a wild game down to the end with some shaky penalties on Nebraska gifting FSU thirty yards on a drive for the game-winning field goal. It ended 18-16. Now the Irish had done their part. The undefeateds had fallen. Florida State had looked far from dominant in an Orange Bowl were both teams committed double-digit penalties. Now it was time to hope the voters respected their own precedents.

In 1989, Notre Dame and Miami had each finished with one loss. Though the Irish had played a tougher schedule, the teams played head-to-head in November and Miami delivered a decisive home win. That victory was correctly given primacy in the final voting and the Hurricanes won the national title. No one could have missed Holtz’s repeated reminders that this situation was exactly the same.

While the ND coach didn’t say so aloud, no one could dispute that Florida State played a better schedule in 1993 (in addition to Notre Dame and Nebraska, they’d beaten Florida on the road, beaten Miami and beaten a good North Carolina team on the road. The only good team they didn’t play was the Troy Aikman/Emmitt Smith-era Dallas Cowboys). But they had lost head-to-head.

1993 Notre Dame, like 1989 Miami, hadn’t feasted on cream puffs all year. All Notre Dame wanted was a consistent strike zone. If it’s about strength of schedule, then give them the ’89 crown. If it’s about head-to-head, given them the ’93 title. The voters did neither and voted in Florida State. Lou Holtz’s 1993 Notre Dame football team was destined to go into history as an uncrowned champion.

Bobrovksy Has To Step It Up In The Penguins-Blue Jackets Series The 1993 Chicago Bulls: A Walkoff Three-Peat