This free download covers all 63 games and discusses all the notable players and coaches, from the historic legends, to those who one shining moment came and went.

Get the PDF download delivered to your inbox FREE! 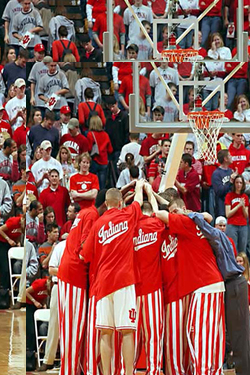 March Madness as we know it today came of age in the 1987 NCAA Tournament. And what a tournament it was. This free download covers all 63 games, discusses all the notable players and all the coaches, from the historic legends, to those who one shining moment came and went. You’ll read about the following…

*The tumultuous swings of fortune gone through by Bob Knight’s Indiana program and how they ended with a national championship on Keith Smart’s iconic jumper on Monday Night.

*How Syracuse coach Jim Boeheim was often derided for an inability to win in March, yet with a trio of Sherman Douglas, Derrick Coleman and Rony Seikaly, came within a basket of winning the whole thing.

*UNLV was arguably the nation’s best team and rolled into March with championship expectations. Read how they captured the heart of the Vegas Strip, captured a Final Four berth and nearly cut down the nets themselves.

*Rick Pitino and Billy Donovan would become staples of March Madness in the future. In 1987, they were just the combination of an unknown coach and point guard. Read how they made the Providence Friars the Cinderella story of the Dance.

*North Carolina looked unstoppable coming into the tournament, with Kenny Smith at the point and the powerful J.R. Reid in the post. Read how this March added to what was becoming a disturbing trend of postseason disappointments for the great head coach Dean Smith.

*The Georgetown program of John Thompson was only a couple years removed from the dynasty era of Patrick Ewing and looking to return to the top. They had the appearance of a Final Four team as they entered the Dance. Read how the Hoyas moved forward and how they came up just short.

These six teams constituted the four who made the Final Four in New Orleans and the two #1 seeds who missed. They were the heart of the 1987 NCAA Tournament, but they certainly weren’t the whole story. This sweeping look at the entire bracket includes more…

*There was Austin Peay’s first-round upset of Illinois and the uncomfortable position it put ESPN’s Dick Vitale in.

*Wyoming’s duo of Fennis Dembo and Eric Leckner electrified the West and they were one of the great stories out of the first weekend.

*1987 was the last collegiate dance for great players like David Robinson, Mark Jackson and a whole lot more.

They’re all here. From The General to the Admiral. From Pitino to Tark and from Dean to Big John. This was the first NCAA Tournament to use both the shot clock and the three-point line and it brought March Madness into a new era.

Just enter your e-mail address in the form above and read all about it for FREE.